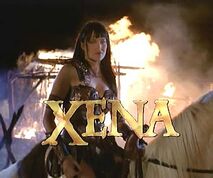 Xena: Warrior Princess was a television series that aired from September 15, 1995 until June 18, 2001. The series was produced by Pacific Renaissance Pictures Ltd. (owned by Robert Tapert and Sam Raimi) in association with Universal Studios. It starred Lucy Lawless as Xena and Renée O'Connor as her companion Gabrielle. It is historical fantasy set primarily in ancient Greece. The show chronicles Xena's quest to seek redemption for her past sins as a ruthless warlord by using her formidable fighting skills to help people. Gabrielle becomes Xena's greatest ally; her initial naïveté helps to balance Xena and assists her in recognizing and pursuing the "greater good."

The series is a spin-off of Hercules: The Legendary Journeys. In fact, the saga began with three appearances: Xena's special character in episodes of Hercules: The Legendary Journeys, entitled The Warrior Princess, The Gauntlet and Unchained Heart. In the first episode, Xena is an outlaw, but in the third, she joins Hercules to defeat Darphus, who had taken her army. Aware that the character of Xena had been very successful among the public, the producers of the series decided to create a spin-off series based around her adventures.

Community content is available under CC-BY-SA unless otherwise noted.
Advertisement